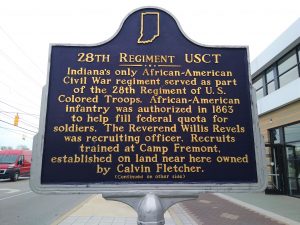 Fletcher Place is historically significant because its residents made many contributions to the early development of architecture, religion, commerce, education, and social life in the city of Indianapolis. The structures they built, which remain to this day, are evidence of this contribution.

Fletcher Place derives its name from Calvin Fletcher, Sr. (1798-1866), whose farm originally encompassed most of the land in the area. The early settlement of what was to become Fletcher Place started with the Fletcher farm, known as Woodlawn. Gradually, the Fletchers and their associates platted the area into individual lots, beginning in 1857.

In the 1850’s, German and Irish immigrants settled in the plats, first in the eastern section of present Fletcher Place. By the 1860’s, large, substantial houses were rising on Fletcher Avenue, and smaller cottages for workers and craftsmen were being built on streets to the north and south. The name Fletcher Place was first used in 1872.

With this settlement came the demand for services and, in addition to the churches and a school, other land uses for trade, commerce, and industry. Virginia Avenue became the commercial spine that linked Fletcher Place to the “Mile Square” and the area to the south known as Fountain Square.

The ethnic settlement of Fletcher Place is representative of the Southside as a whole. The early settlers came from both the South and East, while some, such as Calvin Fletcher, came from New England. Very soon came waves of Irish laborers, attracted first by canal and public road building and then by railroad construction. German settlers soon followed and continued to arrive as they fled conscription and revolution in Europe.

Towards the end of the century, Italians, Jews, and Central Europeans arrived. More recently, there have been new residents and owners who have come from Appalachian areas. The changes in ownership found in title research reveal this pattern. Fletcher Place is significant, therefore, as a record of the Southside’s beginnings and evolution to the present as a stable, working class community made up of a variety of ethnic groups important to the city’s heritage.

Welcome to the neighborhood! We have all the resources you need to help ease your move.

Contribute to our Neighborhood!

Connect with us on Social Media

Be sure to follow us on social media to stay up to date on all the happenings of our neighborhood.

Subscribe to the Fletcher Place newsletter and keep up with all the latest events and neighborhood news.